Scientists Across Fields Focus On Aleutians

For years, Debbie Corbett was regional archeologist for the U.S. Fish and Wildlife Service. She retired in 2013 and began freelancing. She also started working on organizing a forum for scientists doing research in any field - as long as it was centered on the Aleutian Islands. Corbett says the idea hatched at a National Science Foundation-funded workshop on North Pacific archeology a few years back.
KUCB Link to Story

Daily since late April, researchers have made their way to the end of A dock at Unalaska's Carl E. Moses boat harbor. There they pull up a series of people-sized circular nets - sort of like Japanese paper hanging lanterns - and peer inside. Jeff Cox is a contractor for the Bering Sea Fisheries Research Foundation.
KUCB Link to Story

Last week the Walker-Mallott administration announced the formation of the Governor's Tribal Advisory Council. Eleven Native leaders from around the state were appointed to sit on the council, including Sand Point's Tiffany Jackson, executive director of the Qagan Tayagungin Tribe. KUCB spoke with Jackson via phone Friday morning.
KUCB Link to Story

Organizers of the inaugural Unangam Tunuu Download Camp are inviting interested participants to attend a two-week-long language camp this summer on St. Paul Island in the Pribilofs. Aquilina Lestenkof is director of the cultural affairs office for the tribal government of St. Paul Island. She's looking for six teams from eastern Aleutian Unangan communities to attend the all-expenses-paid camp.
KUCB Link to Story

PFD Use Rare In Port

A fisherman on a Dutch Harbor-based trawler died last week, but not while he was working out at sea. Divers found his body underneath the dock where his employer's boat is berthed. Police are still investigating, but it appears the crewman fell in the water unseen upon returning from a night out on the town.
KUCB Link to Story

Unalaska's tourism office will be missing an executive director when the first cruise ship of the season docks here on April 23. From 8 a.m. to 5 p.m. that Saturday, over a thousand passengers and a few hundred crewmembers will disembark the Crystal Serenity, expecting a day full of sightseeing. One of the remaining two staff members of the Unalaska and Port of Dutch Harbor Convention and Visitors Bureau says CVB representatives will be at the dock to greet the boat.
KUCB Link to Story

Alaska’s Pavlof Volcano has calmed down after days of dramatic activity. Early this week, the volcano, which is in the southwest part of the state, threw a thick brown and gray cloud 37,000 feet into the sky. The blast inconvenienced travelers across Alaska and spewed ash over Nelson Lagoon, a village 55 miles northeast of the volcano, where residents stayed indoors and watched porches and roofs darken.
NPR Link to Story

36 Democratic voters gathered at Unalaska's Methodist church to caucus for their preferred presidential candidate Saturday. Most came to support Bernie Sanders, but six voters headed to the Clinton corner when it was time for the morning's fan out. The areas designated for Rocky De La Fuente backers and the undecided remained empty.
KUCB Link to Story

After three attempts over the past decade, the Unalaska Native Fishermen's Association succeeded in an effort to close Unalaska Bay to commercial trawl fishing. On Thursday the Alaska Board of Fisheries passed Proposal 194 by a six to one vote. The Unalaska Native Fishermen's Association - known as UNFA - put forward the proposal, which sought to "close all waters of Unalaska Bay to commercial fishing for groundfish with pelagic trawl gear."
KUCB Link to Story

A proposal to permanently close Unalaska Bay to commercial trawl fishing is up for discussion at an upcoming Alaska Board of Fisheries meeting. The statewide meeting takes place the second week of March in Anchorage, and Qawalangin tribal president Tom Robinson will be there to testify. He will be speaking on behalf of the Unalaska Native Fishermen's Association (UNFA).
KUCB Link to Story

Unalaskan voters who are already registered Republicans - or want to be - will now have a chance to participate in the Alaska Presidential Preference Poll this coming Tuesday. Until this week, it looked like local Republicans wouldn't be able to cast their votes in the poll since voting must be done in person - and the nearest polling place for District 37, which encompasses the Aleutian Islands and a large portion of the southwest mainland, was in Naknek.
KUCB Link to Story
View More Stories

From 2016 to 2021, Greta was news director at KCBX, covering Salinas to Santa Barbara. She produced and delivered the nightly newscasts, produced and interviewed newsmakers for a weekly news magazine and was responsible for local news content on the KCBX website, training interns and forging new partnerships with area and statewide news outlets.

Prior to joining KCBX, Greta served as acting news director, reporter and news anchor at KUCB, a public radio station in Unalaska, Alaska, covering the Aleutian Islands. She's also worked as a public radio reporter in Sitka and Haines, Alaska. In May 2015, Greta earned a master's degree from the UC Berkeley Graduate School of Journalism.

Prior to attending the J-School and transitioning into public radio journalism, Greta was a newspaper reporter for over a decade. Port Townsend, WA is her hometown and she lives aboard her ’30 Catalina at the Berkeley Marina. 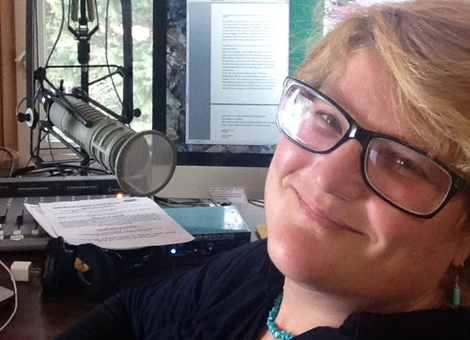